The event was called the Coldest Night of the Year (CNOY) but the warmth and caring of a community stood out.

“We were floored by the response to this event,” said John Clarke, United Way Perth-Huron’s (UWPH) Manager Community Development, Goderich and Huron. “Pretty early on it was obvious people were engaged on this issue, but the spirit of the night and the results were beyond anything we expected.”

Three hundred walkers headed out Saturday, February 22 to raise awareness and funds around the issue of chronic homelessness in Goderich. UWPH Executive Director Ryan Erb was on hand at the Royal Canadian Legion Branch 109 to speak before walkers headed out into the night and a chili dinner was waiting when walkers returned along with a CNOY-themed dance. CNOY raised over $49,000 — well beyond the $30,000 goal.

“It was inspiring to join with the people of Goderich and show how much this community cares,” added Erb. “The money raised will help sustain our collaborative work to end chronic homelessness.” 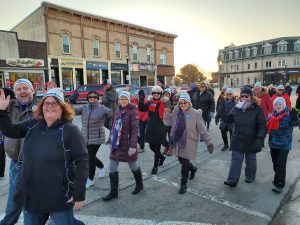