The community joined together Saturday night for the Coldest Night of the Year (CNOY), an event that raised $40,753 for efforts to help eliminate homelessness in the area.

“It’s really amazing,” said Heather MacKechnie, co-chair of From Street to Feet, which helped organize the event with United Way Perth-Huron. “I’m really impressed with the community and the support that we found. It totally blows my mind that we got up that high,” she said of the event, which had a goal of $30,000. MacKechnie noted money will continue to come in for CNOY over the next couple of weeks.

The issue of homelessness in the area has been given more attention over the last several months, with From Street to Feet hosting public forums and initiating fundraising efforts to help those who struggle with homelessness. MacKechnie said awareness has increased and homelessness has become visible in the community with people seen camping out on the steps in

front of Exeter’s town hall and at Elliott Park.

“I think the community has become more aware and maybe more concerned about the situations that people are dealing with,” she added.

Last Saturday’s CNOY had 274 registered walkers who started at Exeter Christian Reformed Church and made their way down Huron Street where they walked up Main Street. When it was done, everyone gathered back at the church for dinner and speeches.

MacKechnie said she has received very positive feedback from the event so far and CNOY will be held again next year in Exeter.

“People really enjoyed it,” she said. “They were excited to be part of it.”

From Street to Feet and the United Way have banded together to raise $88,000 for homeless services by the end of March. Money raised will go towards adding three beds at the Turning Point Home in Exeter, as well as services for housing location, support for tenancy and more.

Fundraising efforts continue, and MacKechnie said they are still looking to raise another $22,000 by the end of March. Moving forward, From Street to Feet is looking at options for long-term access to affordable and supportive housing in the community.
“We’re working with the municipality and some other partners to see what is feasible that way,” MacKechnie said.

The Coldest Night of the Year was cold in name only, as the event started at 5 p.m. under a clear blue sky and warmer than normal temperatures for this time of year. 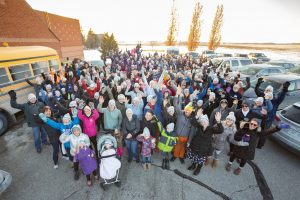